My main research interest is to understand the evolutionary processes that produce adaptive phenotypic variation, particularly in situations where organisms are exposed to novel environmental conditions. I am tackling these questions both over short (phenotypic plasticity) and longer (adaptive evolution) time scales and my research is mostly focused on different lineages of fishes (e.g., threespine stickleback and cichlids).
The visual system
My research on the visual system aims at understanding how changes on the molecular level are translated into adaptive phenotypic variation. The visual system of cichlid fish represents an excellent model to study adaptive evolution since it is highly variable, the phenotypic effects of molecular changes are well-understood and there is detailed knowledge on the adaptive value of visual phenotypes under certain environmental conditions. Our work on the visual system has demonstrated that, at least over short evolutionary scales, regulatory changes are more important than structural changes during adaptation to novel light conditions. At this time scale, the direction of phenotypic change is largely predictable, although the particular molecular mechanisms underlying such changes might not be (MBE 2017, Evol Let 2018). Notably, shifts in gene expression during ontogeny appear to play a crucial role during adaptive evolution of the visual system of cichlids (Mol Ecol 2017, RSOS 2019). Moreover, the ability to adjust the visual system to changing light conditions can occur very rapidly and appears to be maintained into adulthood (JEZ-B 2018). Overall, this work has improved our knowledge on how cichlids can adjust their visual system to novel light conditions almost instantaneously via phenotypic plasticity but also very rapidly (on an evolutionary time scale) over a few hundred generations via adaptive evolution.
The gut microbiota
We all contain multitudes: more than half of our body’s cells are microorganisms. The recent realization that these microbes can play a crucial role for the eco-evolutionary dynamics of their hosts is highly fascinating. The so-called gut microbiota is particularly complex and dynamic and its composition is shaped and maintained by a combination of host genetics and environmental factors (e.g., diet). To understand how the gut microbiota changes during early stages of ecological divergence and speciation, I am currently investigating the gut microbiota as well as the trophic position of multiple species from the young adaptive radiation of Nicaraguan Midas cichlids. In particular, I am asking to what extent the gut microbiota is affected by phylogeny or trophic ecology of the host species, or even by the microbial community of theses fishes' natural environment. 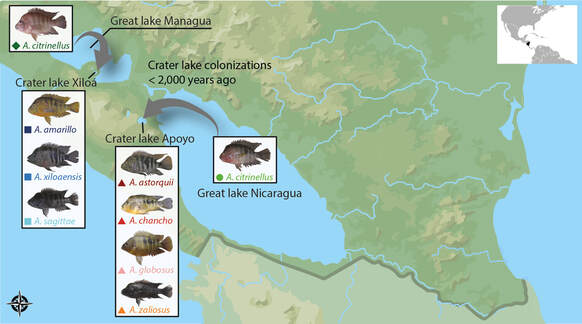 The Nicaragua Canal
In 2013, a Chinese consortium was granted the concession to build an interoceanic shipping canal, called the Nicaragua Canal, across the Central American isthmus through Nicaragua. Such large-scale infrastructure projects commonly have drastic effects on ecosystems, thereby threatening the maintenance of biodiversity. We sought to shed light on species’ distribution and patterns of population structure across distinct watersheds that would be connected by the canal and intended to inform about the effects of artificially connecting these watersheds on the freshwater fish fauna of Nicaragua (Conserv Biol 2017). We found that only one third of freshwater fish species are shared among the two watersheds whereas one third exclusively occurs in either of the two. This emphasizes on the huge threat of biotic homogenization once the two watersheds would be connected. Further, mitochondrial DNA (cytb) sequencing of multiple species revealed that populations from distinct watersheds are genetically differentiated whereas within the same watershed, genetic differentiation is commonly low. Bringing these differentiated and locally adapted populations into contact through the Nicaragua Canal would most likely cause an extensive loss of genetic diversity. Further, species were detected in areas where they were not known to exist. Taken together, these results demonstrate that constructing this canal would have adverse effects on Nicaragua’s freshwater biodiversity. Fortunately, the construction of the Nicaragua Canal has not started yet and, most likely, this risky and irrational project won't be realized in the near future.